We would like to say a huge thank you to the former students of Whitehaven Academy for their very generous donation of £2,500 which they donated to our charity after they were unable to hold their leavers school prom last year.

The former year 11 students were forced to ditch their celebratory party last year when coronavirus hit, but instead of putting their party on hold for a later date they decided to donate the money raised to Hospice at Home West Cumbria. 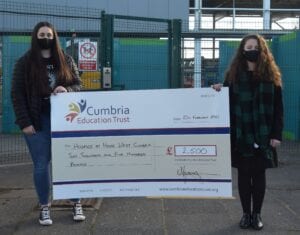 Caitlin Miller and Carenza Curwen who were the main protagonists on the prom committee, set off raising funds with the rest of the students by having bake sales and bag packing in Morrison’s among many other events – they also took part in the Hospice at Home annual Christmas Jumper day, which they have supported the last couple of years.

Caitlin Miller former student at Whitehaven Academy said: “We were disappointed not to have a Prom to say goodbye to everyone, but the money has actually gone to a better cause, so it doesn’t feel so bad.”

“We became sceptical about the Prom going ahead during the first lockdown. Then later, when we got our GCSE results we realised everyone was moving on with their lives and going to college, sixth form or apprenticeships.

“We saw that the charity shop had to close because of the pandemic and knew they must be struggling, so it’s good to help.”

Headteacher Nigel Youngman said: “No one should underestimate the generosity of spirit of the young people in this community. These teenagers put aside their own disappointment and made the needs of others their priority. It’s a wonderful gesture and we’re extremely proud of them all.”

Gemma Bell, Community Fundraiser said “We are completely overwhelmed with the generosity from the students at Whitehaven Academy. It was so disappointing that they couldn’t have the prom they wished for, but by donating this fantastic amount they are enabling us to continue to care for families and their loved ones in the local community at the most difficult time in their lives. They should all be really proud of themselves.”

Thank you to the students and everyone at Whitehaven Academy for your continued support, we are extremely grateful.