We would like to say a huge well done to Kevin Greenhow who is currently reaching the end of his Captain Tom 100 challenge: a 100-hour litter picking challenge. 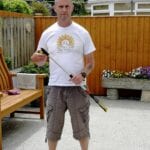 A challenge which is based on completing an activity around the number 100, Kevin decided to clean up his local community by completing 100 hours of litter picking.

So far, Kevin has completed 93 hours of his challenge, and done this by trying to stick to around 2 hours every week throughout the past year. Kevin was accompanied by his dog, Charlie, for most of the challenge.

Kevin completed his challenge in areas throughout the Allerdale borough, and his routes can be viewed on his Strava, which can be viewed here

As well as the 100 hours collecting the litter, Kevin estimated that he has also spent another 20 hours sorting through the litter and separating the recyclables. Allerdale council allocated an additional recycling bin, which Kevin states he has filled around 50 bins with cans, plastic and glass bottles.

Kevin has chosen to fundraise for Hospice at Home West Cumbria throughout his challenge, because he knows how invaluable the services are to families in the local community, which Kevin and his family were offered during his Mothers illness.

If you would like to make a donation and follow Kevin’s progress on where he has been, please visit his JustGiving page