Joanna Hadfield and the members of Cockermouth Golf Club recently donated an amazing £570 to support Hospice at Home West Cumbria, in memory of her late husband, Neil.

Cockermouth Golf club hosted their annual President’s Day in May, which was in honour of Neil, who had been a well-respected member of the club for many years. Neil held positions as the Men’s Captain in 2016 and was later appointed the President in 2021.

Neil sadly passed away in April this year aged just 61, after fighting a long and courageous battle with cancer since his diagnosis in 2018.  Hospice at Home West Cumbria offers a holistic approach to care for both our patients and their close family members. Neil, Joanna and their daughter Catherine, received support from Hospice at Home West Cumbria during Neil’s illness, which they all found really helped them to deal with their fears and anxieties.

Neil received lymphoedema treatments and attended a patient group, as well as emotional support from our family and bereavement support team. His wife Joanna and daughter Catherine were also offered support during this very difficult time, and they benefitted from complementary therapies and bereavement support.

Neil was a much-loved family man and well known from his teaching days at Wyndham school as an English Teacher and Head of Computers, later transferring to Keswick School as an English Teacher where he became assistant headteacher and Head of Sixth Form before he retired in 2017.  Whilst teaching at Wyndham School, Neil met Joanna, and the couple had two children, Catherine, 29 and James, 27. 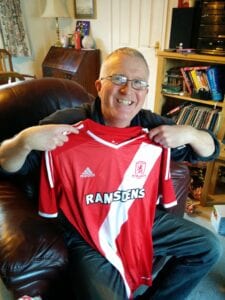 Neil was a keen sportsman and an avid Middlesbrough FC fan, which ignited his passion for sports within the community and his involvement in West Cumbria Teachers’ Football, Lads, Dads and Lasses and Bitterend football teams.

Neil was a regular quiz attender and a keen birdwatcher and a member of the RSPB, – he even got a mention in the Cleveland County records after spotting a European Bee-eater Bird!

Joanna said: “I can’t thank hospice enough for being there in our time of need. They provide an amazing service in West Cumbria, and we are very fortunate to have them.”