Our Family and Bereavement Support (FABS) worker Michelle Tinnion made the best of another weekend at home by inviting all of her neighbours to take part in a socially distant quiz and online raffle.  A total of £350 was raised! 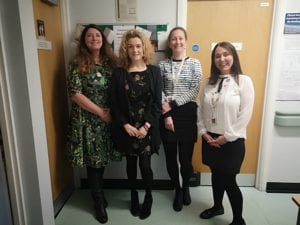 Although Michelle is part of the FABS team, she often volunteers her time to be a fundraising superstar for Hospice at Home West Cumbria and over the last few years has organised things such as tombola’s, car boot sales, girl’s nights in and a talent show.  Michelle said “On Easter Sunday I organised a street quiz for Hospice at Home West Cumbria.  Everyone was very supportive and took part and fully enjoyed the competition.  Everyone showed their support by wearing their hospice sunflowers and we also held a raffle on Facebook which was brilliant.  I want to say a massive thank you to all who donated and took part”.

Here at Hospice at Home West Cumbria we want to say a huge THANK YOU to you and all your neighbours too.