In December last year we were honoured to meet Gary McKee from Cleator Moor. Gary contacted us to discuss his plans to support Hospice at Home West Cumbria by taking on a phenomenal challenge.

From 1st February until 21st May this year, Gary will run 110 marathons in 110 consecutive days to raise awareness and vital funds for Hospice at Home West Cumbria and Macmillan Cancer Support. 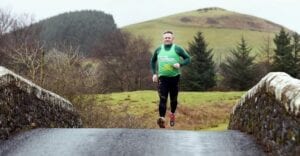 Gary is well known locally and nationally for his fundraising efforts through supporting Macmillan Cancer Support, and for the past 18 years has raised an incredible amount to help people living with cancer. Gary has now decided to extend that support to Hospice at Home West Cumbria and help people who have been diagnosed with a terminal illness, and want to spend their final days at home being cared for by a hospice nurse.

Gary started his fundraising journey in memory of his late father Victor, who was diagnosed with lung cancer in 1997, and passed away in 2003 from an unrelated illness. His challenges over the years include a cycle ride through Brazil, climbing Kilimanjaro, trekking in New Zealand and running from Land’s End to John O’Groats. He has also taken on more local challenges such as running the Coast to Coast cross country path and the 113 mile Fred Whitton route in less than 24 hours. 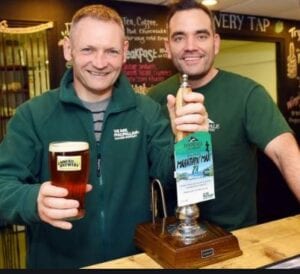 In 2017 Gary completed 100 marathons in 100 days and was awarded the Freedom of the Borough of Copeland. Ennerdale Brewery also produced a beer in his honour and named it ‘Marathon Man’.

Gary said “When I ran 100 marathons in 100 days in 2017 it raised a lot of money to help people less fortunate than ourselves and it also galvanised our community, bringing people together like I’d never seen before. There was a feel good factor about it and I think we can replicate that again. During the dark days of lockdown a challenge like this can give people hope and is something to look forward to each day. I’m driven by the desire to help people and although I can’t fight their battles for them I can certainly fight it with them. I think reading the CV of the challenges I’ve completed make me look like some sort of superman but I’m definitely not that. I’m just a fundraiser who has a passion for helping people, people from every walk of life that have found themselves in less fortunate situations. My Dad would probably have described what I do as having a gift, a gift I’m not prepared to waste”.

Gary’s passion and enthusiasm for helping people is so unbelievably moving, and his attitude to tackling this monumental challenge is incredibly inspiring. He has set himself a fundraising target of £10,000 which will be split 50/50 between Hospice at Home West Cumbria and Macmillan Cancer Support. We are so excited to be on this journey with Gary and will be sharing regular updates on the ‘News’ section of our website. We hope our local communities will get behind him once again and show their support.

To adhere to the current restrictions, Gary will not be travelling outside his local area and will be running from his home. He will be sticking to local routes and at times when he does run with another person, social distancing will be in place.

To sponsor Gary and donate to his fundraising target, please visit – www.virginmoneygiving.com/GaryMcKee1