We would like to pay tribute to a long standing, dedicated member of our clinical team, Angela Gibson, who is retiring from Hospice at Home West Cumbria after over 30 years of dedication and commitment within our home nursing  and complementary therapy teams.

We would like to thank Angela for sharing her journey with Hospice at Home West Cumbria, and for her many years of care and compassion to the patients and families she has cared for.

“What I have loved most about my time with Hospice at Home West Cumbria is helping people on their journey. I feel privileged I can help to make a difference by providing what comfort and support I can, through the skills and knowledge I have learnt in my roles as both a Hospice Nurse and a Complementary Therapist.

It was in 1975 when I qualified as a State Enrolled Nurse (SEN) at the Cumberland Infirmary in Carlisle, but my nursing career wasn’t to start until many years later. At the time I qualified my mum who had a business in Millom called Edith’s Fashions selling ladies and children’s clothes, asked if I could help out while Delia, the lady who worked in the shop, was leaving to have a baby. I was still ‘helping out’ in the shop 23 years later, however, in that time I became a partner in the business and had my two children and loved every minute.

It was one of the early days in the shop that Hazel Watson a lady I knew well called in – while chatting she told me about a new job she had started with a new charity called West Cumbria Hospice at Home. The role was ‘night sitting’ which involved supporting families through the night that were caring for loved ones with a terminal illness, by being there and caring for the patient the family were able to get some much needed rest. The more I heard

about the role the more intrigued I became and so I called the hospice to get a bit more information.  I spoke to Margaret Dowling, a founder member of the hospice, and by coincidence they were looking for more nurses.  Margaret invited me to come up to Ann Burrow Thomas in Workington (where hospice was based) for a casual interview to talk about the hospice roles. Due to the fact I had been out of nursing for several years I was offered a position as an Auxiliary Nurse until I had done a return to practice. Between the shop, family life and night sitting for hospice my life was busy ‘full on’ and I was loving every moment.

In 1999 Furness General Hospital (FGH) were advertising for nurses and about that time my mum sold the business. I applied to FGH and got accepted on their ‘Return to Practice’ and then got a job on a gynaecology ward working as a SEN on nights. Then after doing a ‘conversion course’ I qualified as a Registered Nurse. As the nights were flexible with the hospice I was able to work my shifts at the hospital around them.

Throughout my time between the two jobs I found I had a passionate interest in ‘care of the dying’ and took every opportunity I could to enhance my skills and knowledge relating to it. I trained also in complementary therapies offering reflexology, therapeutic massage and became a Reiki Master. I also completed a counselling course through Cruse bereavement care.

I always felt it an honour going into people’s homes and being trusted and accepted to care for their loved ones. A person’s home is very private and often, when someone has a life limiting illness, it can become like Piccadilly Station. What hospice brings is like nothing else, it’s holistic approach encompasses the medical, spiritual, emotional and physical needs not only for the patient but also those around them.

I have always thought being a hospice nurse is a ‘speciality’ and it has certainly given me a different outlook on life. Many people think my role would be sad and some would say morbid, it is just the opposite – I always found it an honour and privilege caring for patients at the end of their lives from giving emotional support by talking through their worries and helping them feel safe and calm to making them as comfortable as possible by helping them manage their pain.

I have had a truly wonderful time with Hospice at Home West Cumbria, and met so many lovely people and families along the way as my journey progressed from nursing to a complementary therapist. It has been upsetting at times and I have had to face some challenges but I have thoroughly loved my job.

So after 30 wonderful years it’s retirement time and a new adventure enjoying my beautiful grandson Albie, who is already 4 months old. I will treasure the many memories over the past years and being part of a terrific team. Long may Hospice at Home West Cumbria go from strength to strength.” 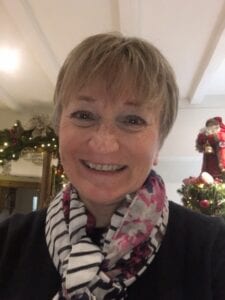