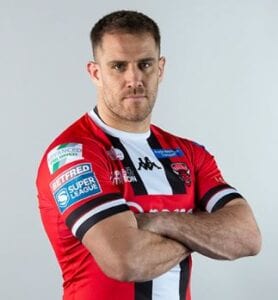 Lee, 32, moved from his hometown of Whitehaven to Wigan in 2008 to start his professional rugby league career playing for Wigan Warriors.  Lee regularly returns to Whitehaven to visit family who still live in the area.

Lee said “I feel extremely proud and fortunate to have been granted this testimonial from the RFL. I have chosen two charities which are close to my heart to support: Hospice at Home West Cumbria, a charity serving the communities where I grew up, and Two Brews based in the Manchester and Salford area, where I currently play professionally.”

Each season a selection of players are chosen for a Testimonial Year in recognition of outstanding service to their club and the game. This is celebrated through a programme of fundraising events to raise money for charities chosen by the players.

Both charities will benefit from funds raised throughout the year from several events including what is hoped to be a gripping game to delight the fans.  Lee has been able to design his own shirt for his testimonial which includes the Cumbrian flag on there and proceeds from shirt sales will contribute to both of Lee’s charities and are available to purchase from Lee’s testimonial website and  Key2 Sports and Nutrition.

Lee would also like to pay tribute to Gary McKee who is also supporting Hospice at Home West Cumbria by running an astonishing 110 Marathons in 110 Days! Lee was massively inspired by Gary’s fundraising efforts and wanted to contribute himself.

Please keep an eye on our social media pages and website for further details of upcoming events throughout the year to support Lee.