Former Brigham resident Anne Sharpe, 50 is running Brigham 10K on Easter Sunday. Anne has run many of the great national road races across the country but none as great as this run in memory of her mum, Joan Sharpe. 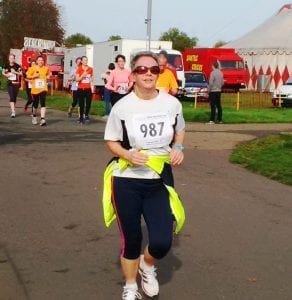 “On the 5th April it will be 10 years since Mum died, as the race is in my home village and really close to the anniversary, this seemed a great way to remember her. I have chosen to raise sponsorship money for Hospice at Home West Cumbria, a charity which was close to my mum’s heart.”

Joan was one of the first fundraisers for Hospice at Home West Cumbria in the Cockermouth area. Joan and her husband David cycled from Land’s End to John O’Groats to raise money for the charity when it started in the late 1980’s. Joan’s involvement as a volunteer fundraiser continued for many years. As well as organising coffee mornings and managing the collection boxes in pubs and shops, Joan also started knitting the now hugely successful Easter Chicks, selling them from County Fruit Stores on Station Street Cockermouth to support the charity.

Anne now lives and works in York but returns home often. Her Dad, David Sharpe has encouraged her to enter this year’s Brigham 10K as one of the series of road races she is taking part in this year to mark her own 50th birthday. “This year it will be 10 years since Mum died from bowel cancer, so feels a good year to dedicate my various races to her.”

“Officially the Brigham 10K is the big race, but I am also doing the Stroke Association resolution 10K, Vale of York 10M, Leeds Half marathon, York (Jane Tomlinson) 10K, and Middlesborough 10K, taking my total to nearly 50 miles raced in the year. I predict a park run or two to get beyond 50 to match my age!”

You can donate to Anne’s Just Giving page: https://www.justgiving.com/fundraising/Anne-Sharpe2019