Kate and Alan Clark, amateur marmalade makers, have had another splendid year at The World’s Original Marmalade Awards and Festival held at Dalemain earlier this year.

Founded in 2005, the competition receives entries from across the world. Over 3000 entrants from 40 countries competed this year, so winning an award is a highly coveted prize. 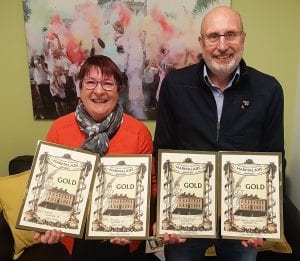 It is an even bigger achievement for West Cumbria based Kate and Alan to come away with four gold and four silver awards with their homemade marmalade, of which they are justly proud. We were delighted when they came to show us their awards and gave a £100 donation to Hospice at Home West Cumbria, made from sales of their marmalade to friends.

Before retirement Alan worked for robinson +co and  Kate was the cook in charge at Ashfield Infants School for 30 years. Kate told us: “My mother taught me how to make marmalade and I’ve been making it for over 40 years now. We made 60 jars of marmalade this year, which we sell to friends.”

Alan explained: “The marmalade making season starts in January when the Seville Oranges come into season. We have experimented with flavours over the years, added ingredients have included treacle, Cointreau, lemon and whisky.  Kate’s Full Fruit Seville was one of our gold’s  this year and my Merry Marmalade too. Steel Bonnets Whisky Marmalade has been popular with our friends.”

Thank you both for your kind support of our charity and sharing your story with us.