We were delighted when M-Sport, based in Dovenby, chose  CFM Radio Cash for Kids Appeal and Hospice at Home West Cumbria to be the beneficiaries of a very special online auction. 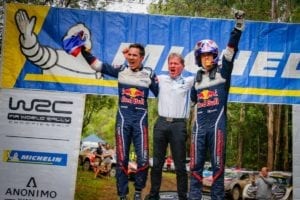 M-Sport Ford World Rally Team won the 2018 FIA World Rally Championship,  a fantastic achievement for the whole team. To celebrate the team held a closed door celebration event for the staff in early December and auctioned two places to join the team for a once in a lifetime event. The highlights included:

The E bay auction and additional offline donations raised a huge £1810 which was split between the two charities. We would like to thank the lucky bidder and M-Sport for their wonderful generosity. All the monies donated to Hospice at Home West Cumbria will stay in West Cumbria to support those who need hospice care and their families.

Good luck to all the M-Sport Team for the 2019 FIA World Rally Championships!