Last year was a difficult year for Hospice at Home West Cumbria, with all our fundraising events being cancelled and our shops having to close, we had to come up with new initiatives to generate the income we need to provide our vital services across west Cumbria.

In June last year we launched our new fundraising campaign – ’50 Faces for Hospice’ and urged the local community to get behind us. The idea was for 50 supporters to sign up with a pledge to raise £500 over a six month period. 18 people signed up to the campaign, which ended on the 1st January 2021 and collectively raised  over £12,000 for our cause. Every penny raised will help fund the vital work our teams provide across west Cumbria.

Gemma Bell our Community Fundraiser said: “In March 2020 we knew all of our annual fundraising plans had to change. The ’50 Faces for Hospice’ campaign was developed to allow people to raise funds from the comfort of their own homes and the ideas people came up with were fantastic! From making and selling facemasks, running and walking challenges, virtual car boot sales and online raffles – to name a few, the commitment from the supporters was incredible. The amount raised is amazing and will be a huge help, ensuring we can carry on delivering our vital services in the local community, particularly in these strange times we are living in at the moment”.

We are proud to introduce you to some of our ’50 Faces for Hospice’ below, who have each shared a small piece of their  fundraising journey:

Louisa has been a regular supporter of Hospice at Home West Cumbria for many years, and is the owner of the Quince and Medlar restaurant in Cockermouth.

Louisa said “I started off raising money by making and selling facemasks. We had hoped to do a competition on our stall at The Taste Cumbria festival as there are usually about 10,000 visitors to the town, but as per everything this year it was cancelled, so we decided to run the competition in the restaurant, but of course we only had a fraction of the foot fall”.

“The idea was to guess how many medlars were in the jar, to win dinner for two at Quince and Medlar. We were delighted with the enthusiasm of our customers and enjoyed watching them trying to work out the number. Generally women just guessed but the men seem to get very involved with mathematical workings out- It was a local lady that won the prize. Hospice at Home West Cumbria is a fantastic charity. I have first-hand experience of seeing close family and friends being looked after by the Hospice at Home ‘angels’. My Mum designed the first logo when Hospice at Home West Cumbria was first launched and she was a great admirer of the cause. Keep up with your amazing work”. 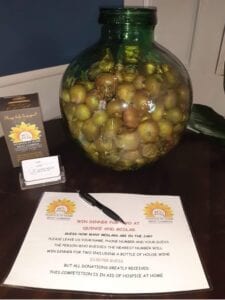 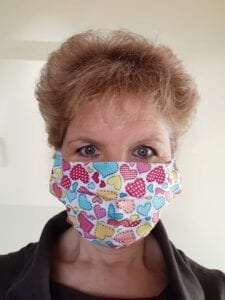 “I began my challenge (50 laps of Longlands Lake in Cleator) on 30th June. My Husband, family and friends kept me company on many of the laps and I usually did 2 laps at a time. I saw so much wildlife, watched the signets grow and thrive and enjoyed every walk I did. As most of my walking was during lockdown or restrictions it was a strange time but the challenge definitely heped my wellbeing. I met lots of lovely people and completed my 50th lap on the 4th October. I am grateful to everyone who donated to such an amazing charity”. 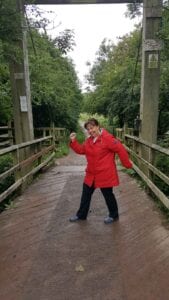 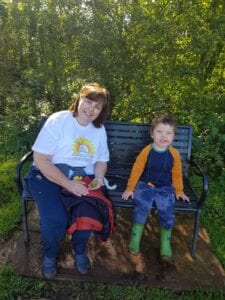 “On the 20th June last year I was due to take part in the Lakesman Virtual Half Marathon during lockdown, so I decided why not raise funds for a local charity. I decided on Hospice at Home West Cumbria as my chosen charity because their staff provide an excellent service to the people of west Cumbria through their emotional and practical support, they provide great comfort to families in west Cumbria during some of the worst times of their lives. I am a member of Cumberland AC running club and Empire Sports Performance gym, this is how I spend my time off when I am not at work as a self-employed painter and decorator”.

“I would like to say a thank you to my wife, family and friends for their support and donations made”. 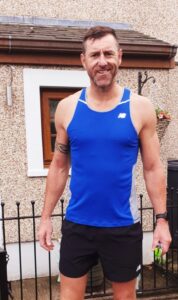 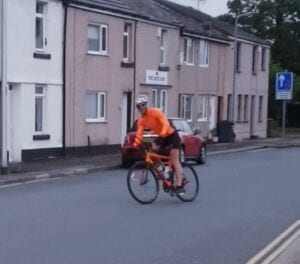 Due to the pandemic, the ability to train and play matches was very restricted, but on the occasions the group did manage to get together they had collections at their training sessions, held a friendly match with the coaches from Allerdale Girls Football Club, and had a day of FootGolf at Penrith Walking Football Club.

David Wise from the football group said “We chose Hospice at Home West Cumbria to be our chosen charity for 2020 as it is important to us that we support local charities and something close to everyone’s hearts. Many of our Walking Footballers have seen the fantastic work that Hospice at Home West Cumbria deliver first hand through their family members, therefore it didn’t take us long to agree they were our chosen charity this year”. 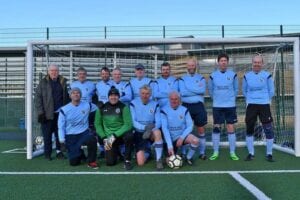 Iain was set to support our charity last year by taking part in the Great North Run, but since it was cancelled, Iain decided to sign up to our 50 Faces for Hospice challenge instead.

“As it became apparent that the Great North Run  was going to be cancelled I was thinking of ideas around how I could still raise funds for hospice, as I know how much they need the funding after most of this years events have had to be cancelled. I’ve been a keen runner for 4 and half years now and so I wanted to base my ideas around my passion. Myself and my wife Christina were thinking of a challenging run and Millom to Maryport was mentioned – as this is the area that is covered by Hospice at Home West Cumbria, and it planted a seed in my head!

On Saturday 5th December last year, I planned to run over 60 miles starting at Millom and finishing in Maryport.  Unfortunately I injured myself at work a couple of months before and had to postpone until February, but due to the current environment and ever changing restrictions I have made the decision to push the date back until later on this year. Thank you to everyone who has supported me so far, I look forward to updating everyone when  I have a new date in place to complete the challenge! 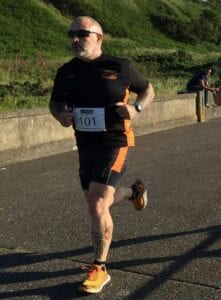 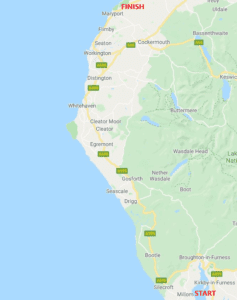 Michelle is part of our Family and Bereavement Support Team and knows first hand how vital it is that people in our community support us through fundraising. Michelle is always on the look out to find news ways of raising money for hospice, and over the years has raised thousands of pounds!

Michelle said “I chose to sign up to 50 Faces for Hospice because now more than ever fundraising is vital. Last year most of the usual fundraising activities hospice would usually organise were cancelled, so we need as much support as possible.”

Michelle done most of her fundraising virtually and held a virtual car boot, Facebook raffles and a Facebook tombola! 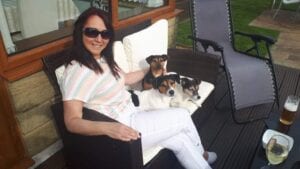 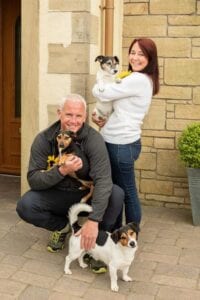 Phil said “I have been fortunate enough to have never required a family member cared for by Hospice at Home, however I think the work they do to bring as much comfort as possible to patients and also the support they give to the families surrounding the patient is a cause worth supporting. Due to the ongoing pandemic a lot of charities are struggling, so this was just a little something to give back to those who give so much to our local community” 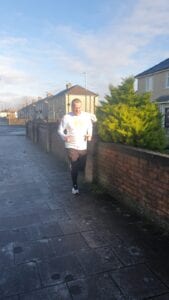 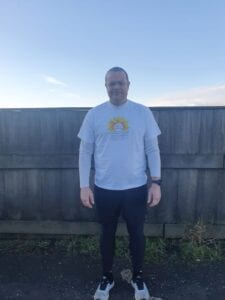 “I am soon to enter my twenty-fifth year of working as a Health Care Assistant for Hospice at Home West Cumbria and I wanted to do something special for the charity that has been such a big part of my working life. I have lived within sight of Skiddaw for many years but have never been to the summit, so my challenge was to climb Skiddaw, and also to walk around Bassenthwaite Lake, Crummock Water, Buttermere, Loweswater, Derwentwater, Ennerdale Water and Ullswater. I have enjoyed these walks so much that I will be keeping them up and hope to have plenty more ticked off my list in the future”. 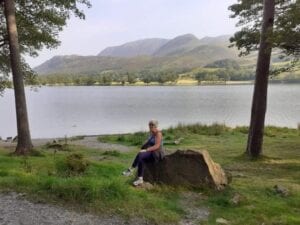 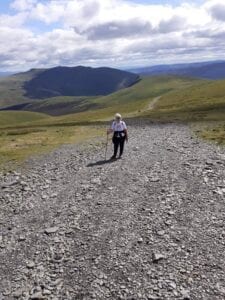 A team from Cartmell Shepherd Solicitors hiked up a total of 50 Lake District fells between! The four-strong Cartmell Shepherd team, who are all based at the firm’s Cockermouth office, scaled 50 of the famous Wainwright peaks to reach their target, with each of them tackling different fells with their partners and families.

Laura Clarke from Cartmells said “As long-term supporters of Hospice at Home West Cumbria, it was important for the team at Cartmell Shepherd to do something positive to support the charity during the pandemic.

“The 50 Wainwrights challenge was an excellent way to raise money and to get outdoors and make the most of the wonderful scenery on our doorstep.”

Laura was joined on the fund-raising team by Lauren Hanley and Gemma Rudd, who are both legal secretaries, and associate solicitor Claire Wilson, who is also a trustee of Hospice at Home West Cumbria.