Gary has now completed a marathon every day for 92 days, and is set to finish this epic challenge on Friday 21st May. The total raised by Gary and others who are supporting him has reached an incredible amount of over £75,000! 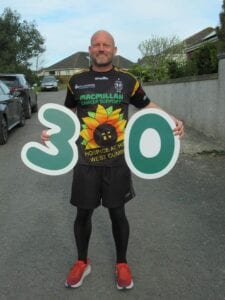 This week we caught up with Michael Watson from Whitehaven, who has been running with Gary throughout and has so far ran 34 marathons and will run 3 to 4 marathons a week for the remainder of the challenge.

Michael is 51 and lives in Whitehaven with his wife Marjorie and two sons Joe, 21, and Harry 14 – who will be celebrating his 15th birthday on marathon day 109!

Michael is a life-long Leeds United fan who loves walking on the fells, he and Marjorie have completed all 214 of the Wainwrights last year. Below Michael tells us why he got involved, and what keeps pushing him along when things get tough:

“I first met Gary in 2017 when I heard about him doing the 100 marathons in 100 days challenge. I worked as a casual instructor at Whitehaven Sports Centre at the time and I thought what he was doing was unbelievable. I decided I wanted to help and so I organised a fundraiser on the indoor spinning bikes. I got in touch with Gary and to let him know and we’ve been friends ever since.

Just before Christmas last year, I got a message from Gary telling me about his plans for this challenge which was to start on 1st February 2021. It was a no brainer; I was always going to do something, although at that time I was only running 6 miles a week. I went for a run the day after and bumped into Kevin Hetherington on the Loop Road, we just looked at each other and laughed – we both knew why we were out!

I spent the first two weeks of running with Gary to build up my mileage. I had only ran 30 miles in December and so I started upping my distance in January. After completing my first marathon on day 13 there was no going back! I completed 3 that week and told Gary I would continue to do 3 every week until the end. 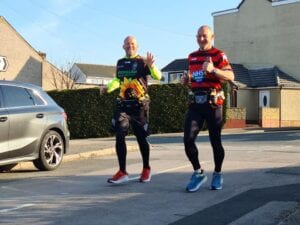 To keep myself fit I usually go to the gym with Kev (Kevin Hetherington) – but that’s on hold for us both at present! I’ve ran for around 5 years now and have completed a few of the big city half marathons, but usually just stick to the 6 milers. Back in 2017 when Gary done the 100 challenge I done around 140 miles with him throughout that, then I joined him on 2 legs when he completed the Fred Whitton run in 2018, and again in 2019 when I joined him and his son Beau to complete 26 x 1 mile laps of the Copeland Stadium.

The biggest challenge doing the marathons has to be the time spent trying to look after yourself during recovery and preparation for the next one. Having to fit them in around my work and home life has been trickier than I thought, but I don’t allow myself to see what I’m doing as hard – hard is what the people we are running for and their families feel.

Thankfully, I have very few personal links to the charities we are supporting and I count myself very lucky. All this running gives you plenty of time to remind yourself how fortunate you are and the thought of those less fortunate, going through difficult times really pushes me along.

I want to say a huge thank you for the support we have all received while running on the cycle track, across social media and from the community at large – it really is amazing.  I’d also like to thank Gary for giving me the opportunity to be part of it, and both Gary and Kev for being top men.

Not forgetting all the other remarkable people doing their challenges – Stuart and Alfie McKee cycling a minimum of 26 miles each every day. Beau and Minnie McKee for running/cycling mile upon mile every day. Gary’s wife Sue for her amazing support plus Elwyn and Amy who work so hard and do so much behind the scenes to raise the awareness we need.

With only a few more weeks to go please keep supporting, spread the word whenever you can to help these fantastic charities Hospice at Home West Cumbria and Macmillan Cancer Support in any way possible.

On behalf of everyone at Hospice at Home West Cumbria we would like to say a HUGE THANK YOU to Michael for taking on this challenge to support our charity. Every penny raised will stay in west Cumbria and help us care for more patients and their carers and families who need our vital services.